Fifty millimetres, the so called ‘normal’ lens in 35mm photography. It’s a well known term, even in Inch-Countries.

Where does it come from? Apparently it’s the normal field of view of our eyes, but that’s just plain stupid. If we had a field of view of 50mm, we would be quite embarrassed and would have constant neck spasms from balancing our heads from right to left, up and down to scan our surroundings.

You don’t believe that? Just close one eye (we really want to be correct here) and look at the room you’re in. Then take a camera with a 50mm lens and put it to your eye. Oops, where’s the rest of the room? Gone, cut off by the viewing angle of that 50mm ‘normal’ lens. To be certain, the 50mm gives you a correct perspective, it does not make the room larger like a wide angle or shorter like a telephoto lens.

What approaches the ‘normal’ field of view the most is a lens with a focal length of about 40 to 42mm. That’s the perfect normal lens – but exceedingly rare, except for the Voigtlander Nokton 40mm and lenses of some japanese fixed lens rangefinders from the seventies.

when he created 35mm photography single handedly. OK the single handed part is not true but it sounds good, no?

Then again it’s the lens that’s about the easiest to make, to calculate and to have fine optical results with the least fuss.

So we have 50mm ‘normal’ lenses. But we have loads of them.

Every SLR, every range finder in the olden days before the birth of the abominable zoom kit-lens came with one. Mostly the cheapest lenses of the respective system, and with a reason. The huge number of sales brought down the price of course, as well as the relative ease of production of these lenses. The 50mm f:1.8 was the standard fare for any amateur photographer in those days. And the lenses were mostly good, excellent even. And above all CHEAP!

How do those lenses stack up then. Optically most are OK, some have character, some have a soul, some have the ‘Leica Glow’ some are clinically sharp… But one thing differentiates them: SIZE! And I’m NOT talking about SLR lenses here, and certainly not about autofocus SLR lenses that are positively HUUUUUGE.

Here are are a bunch of fifties, all thread-mount lenses for the Leica, none of them a currently sold model. The size differences are quite staggering:

Mind you, the Jupiter 8, a glorious chrome one from the early sixties (I think) is the biggest – at least when the others are collapsed –

but it is by no means a big lens as you can see here. And I have small hands! It’s just a tiny, heavy piece of nice workmanship.

I won’t compare these lenses to their SLR brethren. Much too unfair for those!  And these four can be happy that I don’t own a Leitz Elmar 3.5…. definitely the tiniest lens when collapsed!

But how do they stack up, optically? I have to admit that these lenses are by no measure perfect examples. The Summar is foggy inside and has heavy circular so called ‘cleaning marks’ aka scratches for eBay purposes on it’s front element. The Summitar is fine, apart from one nasty scratch on the front element and some flaked matte black paint inside (cleaned the bits out!). The Industar 50 and Jupiter are very nice and clean. 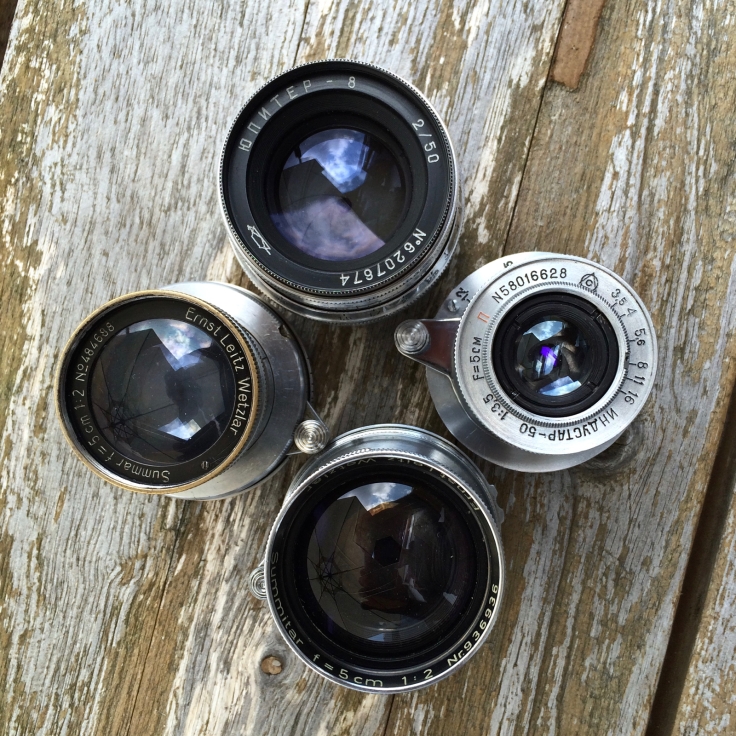 So here we go with a quick and dirty comparison of these lenses. (btw, the sexy model is my Lomo LC-A). All pictures at f:8 for all lenses!

First is the Summitar 5cm f:2:

Then the hazy Summar 5cm f:2 (by the way, the light streak at the top is a light leak in my Leica, in the guiderail of the lower shutter curtain): 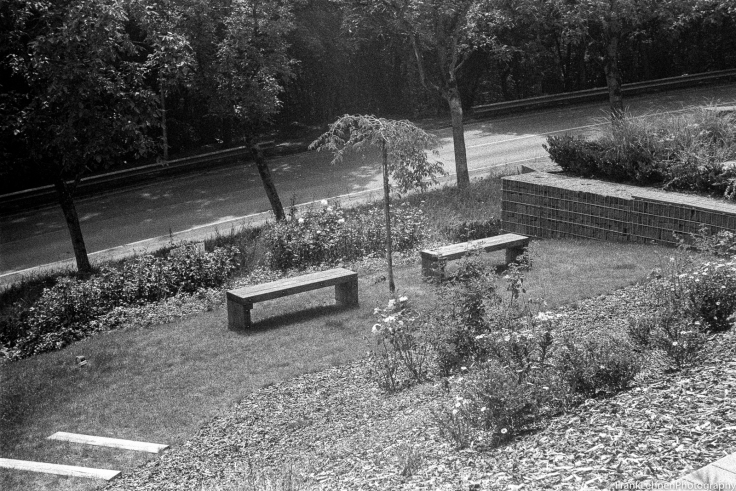 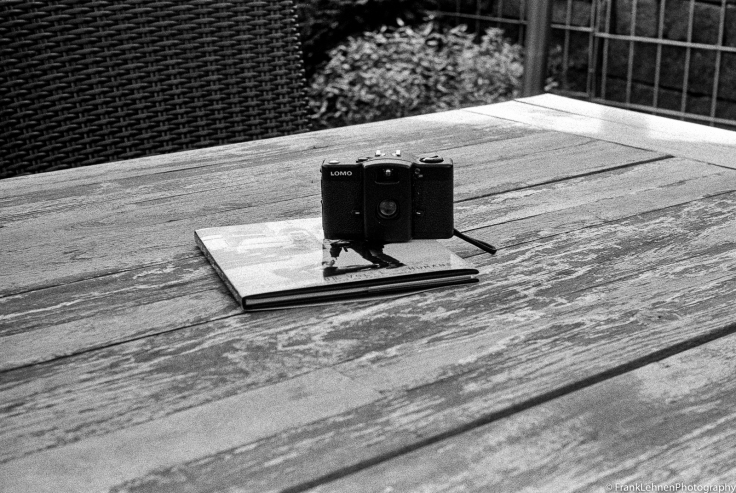 Very clearly, the tiny Industar 50 takes the crown when it comes to (tack-)sharpness and contrast (the scans have NOT been processed in any way! This is the later, coated version and I can recommend it to anyone! Very nice build quality and optically a jewel.

Next in line is the mighty Summitar. A bit less sharp (might benefit from a good professional cleaning) and a bit less contrast, but a nice retro character. The bookeh, visible somewhat in the chair’s back and flowers is quite distressing I think.

Third rank, and here I was quite startled as I thought it would fare much better, goes to the Jupiter 8. Though very clean inside (tested with an LED flashlight), it renders quite softly with lower contrast than both the preceding lenses.

Last, perhaps undeservedly as it needs some professional help, is the Summar. Frighteningly soft, very low contrast…. perhaps usable for some portraiture as it is now, but I’ll have to decide if it’s worth getting it CLA’d… Leica Glow… no, by no means, just a hazy old thing!

I guess the lenses I’ll keep in my bag for everyday use will be the Summitar and the Industar 50. Only problem with the Industar is that the focusing lever very slightly touches the slow speed dial on the Leica IIIa. When screwing it on I have to turn the focus to the near setting to make it clear the dial. In operations it works, at infinity it JUST about touches the dial, but not quite.

Again, thanks for reading this far and see you soon!

7 thoughts on “A Tale of Fifties”