I have had the intention to do some pinhole photography for some time now and some weeks ago I took the plunge and ordered a beautiful wooden pinhole camera from Elvis Halilović at Ondu in Slovenia. I went for a standard 135 model as I would be able to scan the negatives on my dedicated film scanner and as I wanted to experiment a bit and see if I’d get on with pinhole photography…… and also because it’s the cheapest camera they offer.

The camera arrived some few days later and it really is a thing of beauty. Handcrafted from real wood, polished and treated with a natural wax it looks and feels stunning. 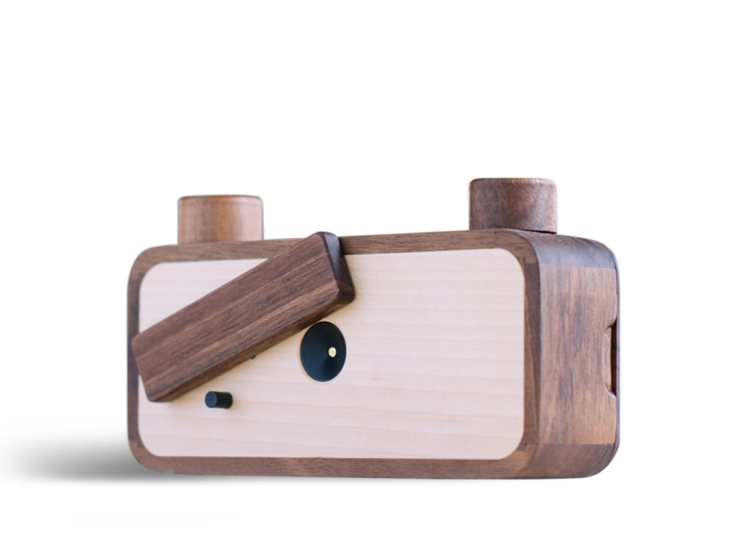 And that shutter mechanism is so complex 😉

The magnets that hold the back and the wind / rewind knobs are a stroke of genius and everything about this camera makes you want to take it out and make photos.

But, there was a but! As 135 film, the ‘normal’ Film we use every day, has no backing paper like medium format, there is no little red window that lets me see if I have really reached the next frame when winding on. I had to go  by feel – Elvis’ small manual said about 1 and 1/4 turn will do the trick, but it’s really too much up to luck. Expect double exposures, overlapping frames and huge gaps between the pictures. And what I found also is that the film does not wind straight. Due to resistance of the film spool, the film path etc the film is skewed when you wind it on and your negatives have a pronounced slant.

It did not work out for me and I sent it back. Now I really want to make this clear! It is not the camera that is worthless. You can live with the hazardous spacing, you can use both knobs when advancing the film so there’s not so much resistance and you’ll get straight negatives…. but I found it not good enough. I don’t even have negatives worthy of scanning… too bad. Nothing to show.

I will certainly buy either a medium format or a 4×5 model from Elvis in the future! Promised! For those cameras the system will work perfectly!

So that left me without a pinhole camera again. And then I had a revelation. My Leica IIIa came with a very nice metal body cap…. Hmm let’s see!

I took a 6mm metal drill and drilled a hole in the centre (well, as near the centre as my skill allowed me).

Then I ordered a hole on eBay…. You didn’t know they sell holes there. Too bad for you. They actually do. Not any kind of holes, no, PINHOLES! A nice guy in Germany sells you a hole for not much money in his eBay Pinhole Shop. Mind you, the holes are not punched with a needle. They are precision drilled in very thin burnished brass, cleaned and made to fit the intended focal length. I went for a 0.2mm hole fitting the 28-and-some mm distance from the film plane in a Leica screwmount camera.

I glued the very thin brass circle with the hole inside the cap and glued a metal ring around it to reinforce the contraption and avoid touching the hole with my fingers.

Then I applied some layers of matte black paint inside and there you go, a pinhole lens, home made and all.

Ooops, I see I got a hair from the paintbrush trapped in the paint – might need some refinement! I’ll get to that later. Now let me watch the paint dry……. humming.

The guys at Skink are selling their nicely made pinhole lens at nearly 90$. What can I say DIY is cheap, rewarding and…. looks crappy! Now if it works I don’t give a damn how it looks.

On the camera it looks like…. a pinhole body cap!

Whoopee, mission accomplished! And before you start, I KNOW THE HOLE IS OFF CENTRE! OK!

I think you will not be able to build a more compact Leica-with-lens-combo as this! Even the new M10 will not be as slim. Watch out XA2, if the Leica wasn’t so heavy it would be really pocketable with the pinhole lens.

Now I just have to load a roll of film and I’ll get back to you in some days with the photos.

By the way, the aperture of this thing is f:145, makes for nice long shutter times and you’ll have to consider reciprocity failure of the different films. Don’t worry, there’s an app for it. I use the Fotometer V2 light meter app Nicely made and very practical pieces of software!

See you all soon!! And thanks for stopping by.