This challenge was for me, and I think I can safely speak for most of my colleagues, the toughest so far. But at the same time, it was the most fascinating for me… certainly not because of the theme!

All started very nicely on that saturday morning. The jury for the challenge were people doing something I’d love to do one day. Joël Nepper and Séverine Peiffer from Lanterne Magique.

They are working exclusively (and professionnally) with large format cameras (and when I say large format it’s the real things!), and ye olde colloidon process.

So they arrived with their gear, camera, portable dark room and all and set up shop. And then they announced the challenge. First reaction from us all… SILENCE. Then a collective moan. Just following that came one thought: I need a model!!!!

Interlude: The fun part, but always with that nude threat in my brain, was watching them setting up their gear, demonstrating the techniques, explaining… and giving me an extraordinary envy to book a course with them soon – will be done later this year. 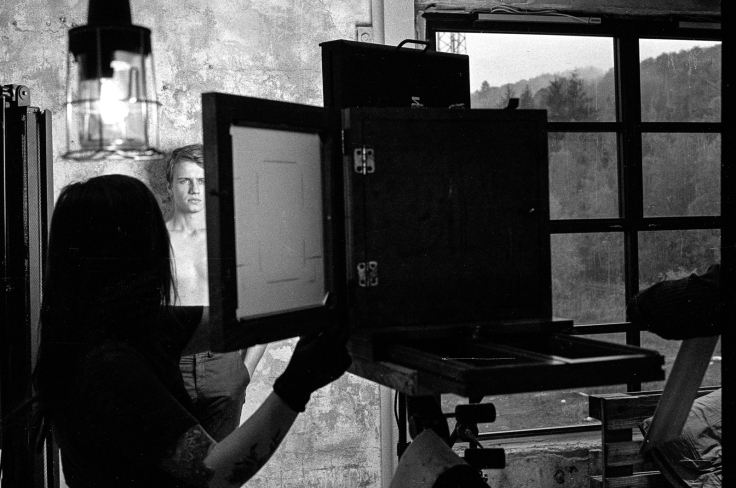 The test shots were fascinating, the rendering of the wet plate collodion with the real Petzval lens they mounted, not the lomography copy, was incredible. Those plates were so beautiful, so incredible… I don’t know how to call it. 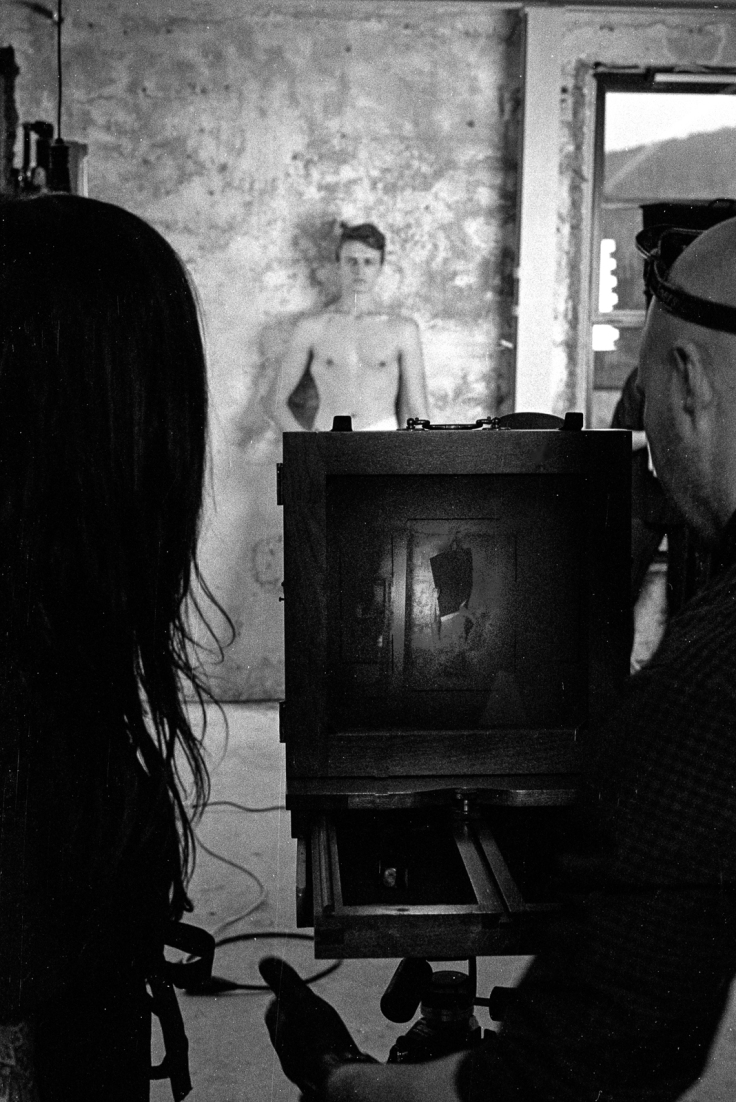 And the whole process was simply so mesmerizing. setting up the camera, preparing the plate, taking the exposure…. If I deem myself the odd one out with my analog film in this competition they beat me here. That’s photography! The real thing! 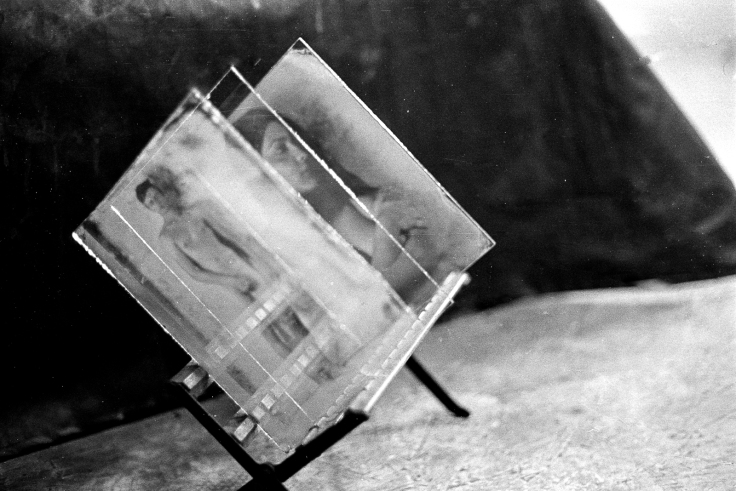 But always there was that terrible fear in my mind, the fear of nude…..

I never ceased to think about what I would do. Who could I ask to sit for me…. no one in the family certainly. Just unthinkable! They would never agree. I paced across the studio, pondering what I could do. My colleague Léa offered to contact a friend who could agree to do it but unfortunately she didn’t have the time….

At last I thought about the only alternative that remained…. another autoportrait with some added salt. No way around it.

And that is the story of the creation of a picture I’m not really proud of. The photograph, in my eyes is crap unless the fact that I stepped over my shadow counts for anything. As I told the jury when they reviewed our work, I was totally fixated on my personal challenge and simply forgot the photograph.

I don’t like that photo a bit, and if I were the jury I would have eliminated myself that day. But they showed pity, I guess. I’m still in! But not proud.

I totally stand behind my decision of course. I just don’t like the result which is meaningless, apart from the old guy having the guts to present a nude photo of himself to an apalled audience….

As I said, I’m not proud, and I still ponder if I should show the result here. You can as well look at the challenge on the RTL site as soon as it will be online.

For those who really have the courage…. but think first before you scroll down, I added the thing. Beware, it hurts the eyes….

And I promise, the next challenge will be better!! 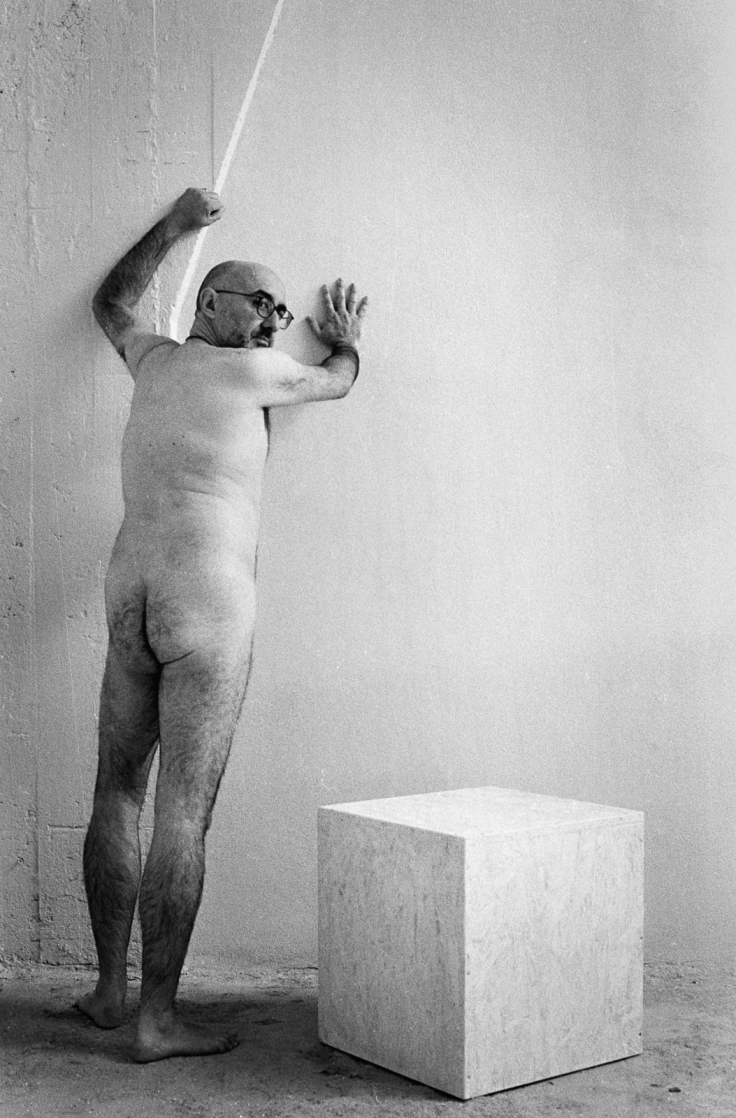