After last weeks terrible experience, this challenge was to be something I like. Well up to now I liked doing it in daytime. The theme was this time ‘Night Photography’ and more specifically, Luxembourg by Night.

We met this time on friday evening, 8 pm at the local railway station and were given the subject of the weekend. Now, photographing my city is not new to me – it’s in fact something I like a lot. What I have seldom done is photographing it by night. Happy digital people who can simply rack up ISO and don’t bother any more. I had to think a bit before setting ISO to 3200 on an Ilford HP5 and trying my luck.

Please note: The final photos I presented to the jury are at the end of this post!

So we all decided what we would like to do (the possibilities were unnumbered) and, accompanied by a film crew, we went our own ways. Some to the outskirts of the city, some to the centre with it’s ‘small town night life’. As I had catched a nice bout of stomach flu (I had doped myself with all available medication for the night), I decided not to go too far and do the railway station and it’s surroundings. 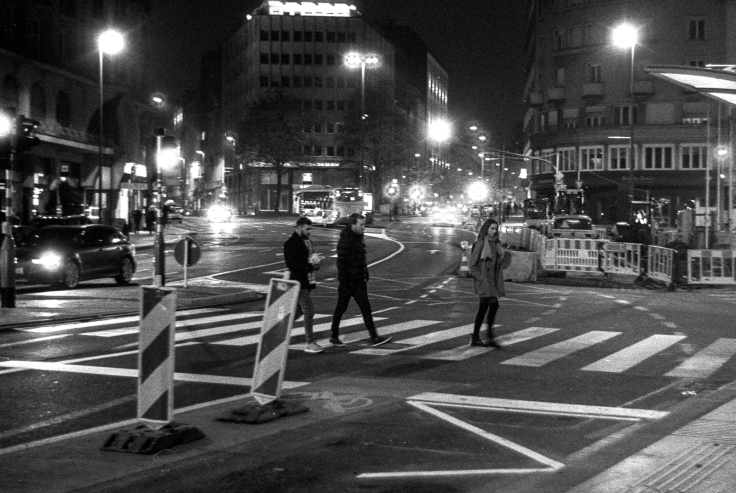 Now this challenge had to be amended for me a bit. All the others had to hand over their memory cards when they finished. As saturday was free for once there was only sunday morning to prepare the best shots for presentation to the jury. Impossible to develop my films, scan  them and do some Lightroom work in that time. So they all agreed that I could keep my films and develop on saturday at home. But no post processing till sunday! Of course I complied totally.

Never in the course of this adventure have I shot as many frames. I had my Canon AE-1 and the Leica IIIa with me and used them extensively. I shot 4 films in the course of about 3 hours… then I gave in to my tummy and returned home, cold, sick and tired…

On sunday I discovered my photos – well, I admit I looked at the negs the day before but that is OK because the others could chimp on their screens too… To my utter joy I saw quite some good stuff. I have never pushed a film to 3200 ISO and was a bit nervous about that. The stand development I did in Rodinal could really coax the best out of the film with nice contrast and not too much grain, but enough for mmy taste.

Of course most of the shots are moody, dark and nicely show the loneliness of a nightly small city railway station. People who are supposed to travel together are alone, each in their small bubble. A place where people come together sees a lot of loneliness. 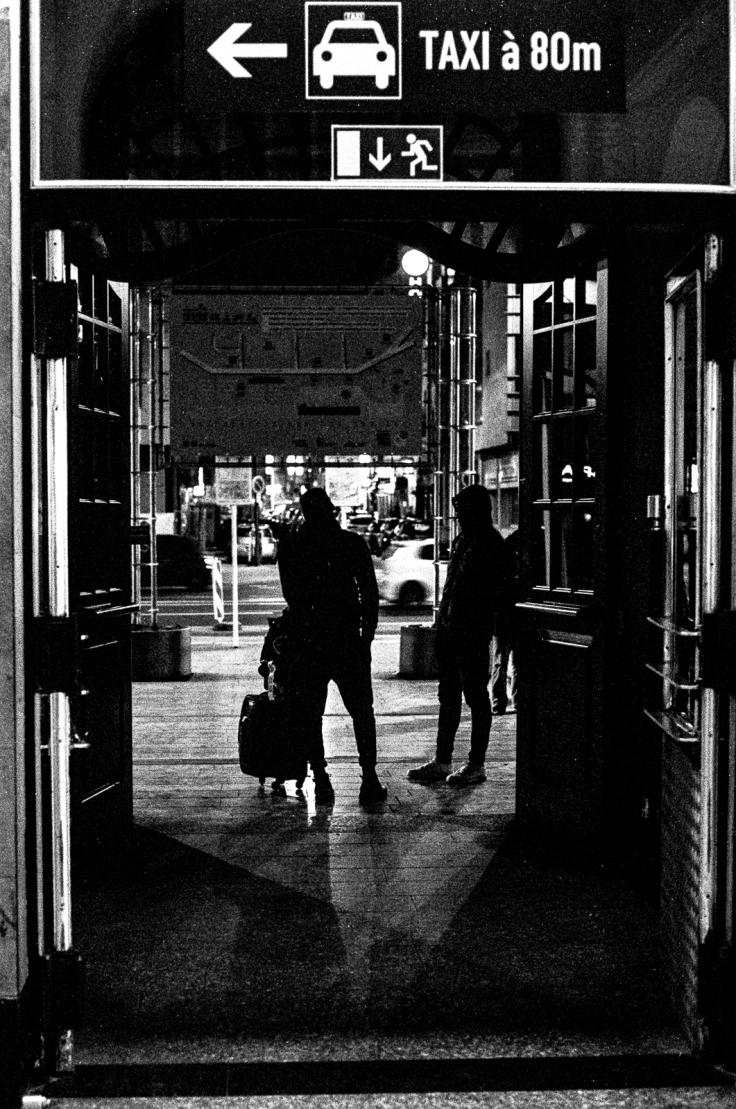 I tried to catch the feel of the station, nearly empty on a late friday night. The halls and walkways silent.

No one in sight… 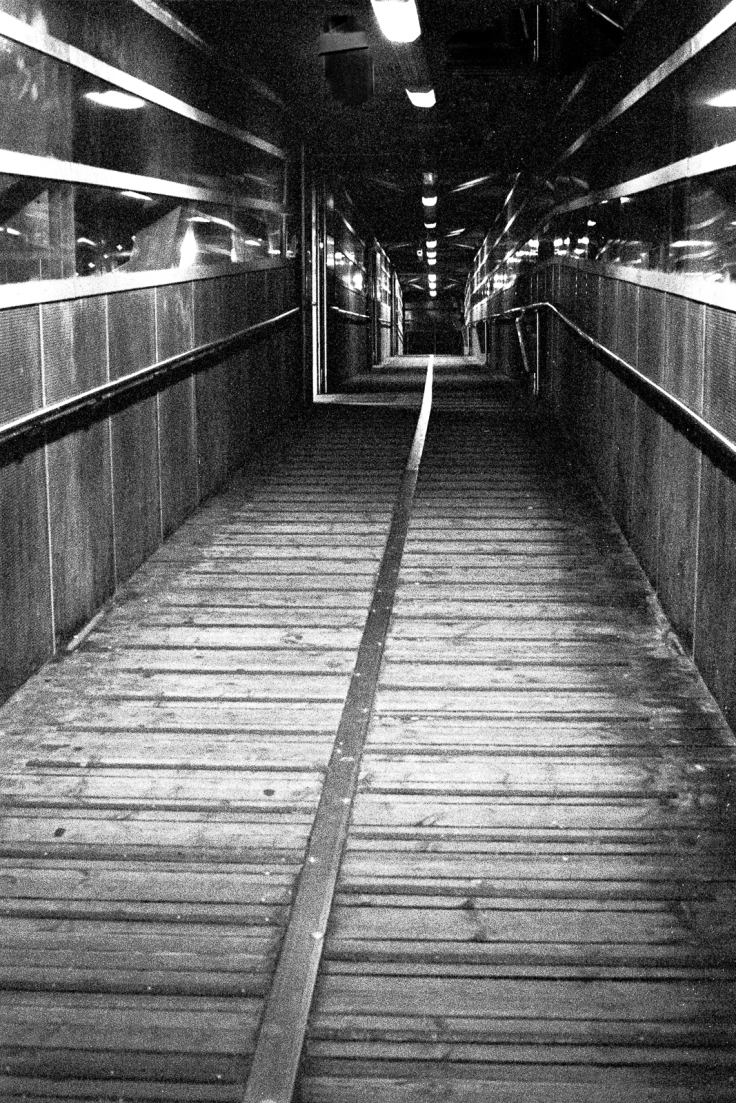 Apart from the occasional trains

Here are the pictures I presented to the jury. In fact, we were supposed to do a series of photographs that could be part of a feature in a photographic magazine. So there had to be some cohesion, something telling a whole story. I focused on loneliness, on a feeling of lost people, alone in the night.

My ‘cover photo’ was to be this one… two people utterly unrelated just crossing, taking no notice of the other. 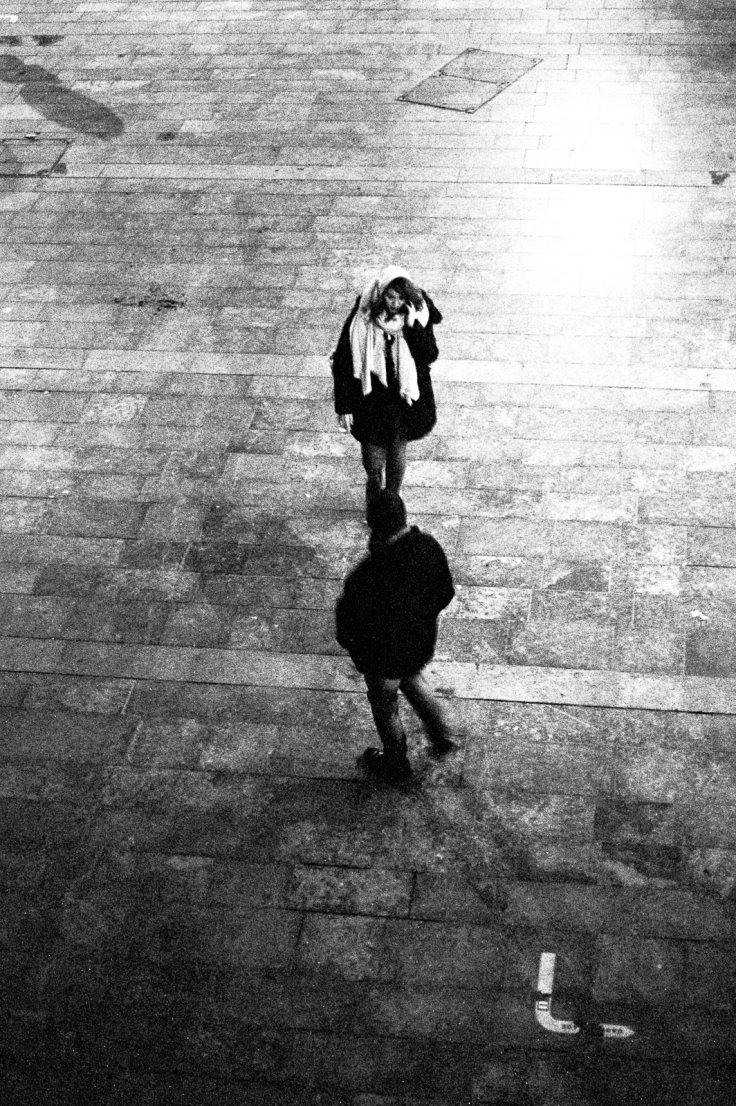 The second one was this guy with his plastic bag just standing there in the underpass. Where does he go? Does he even know….

Third one is more graphic, but again it’s a lonely person in a near empty place.

Number four is again in the same vein, a lonely wait.

Boarding the train at night…

…and waiting for departure.

And of course outside the station, the children of the night. lingering, lurking…

Contrary to my colleagues who showed their photos nicely lined up on the wall I just stuck them on the wall without any order with a bit of duct tape. My explanation was that I was just ordering my shots for the magazine story – it was a preliminary work in progress.

I earned the praise of the jury at least for the presentation!

As always, those who like can watch the broadcast here (will be online about 9 p.m. European Time)!

And by the way, I’m still in! Don’t know how long it’ll last (in fact I DO know but I won’t tell you) but for the moment I’m still OK.