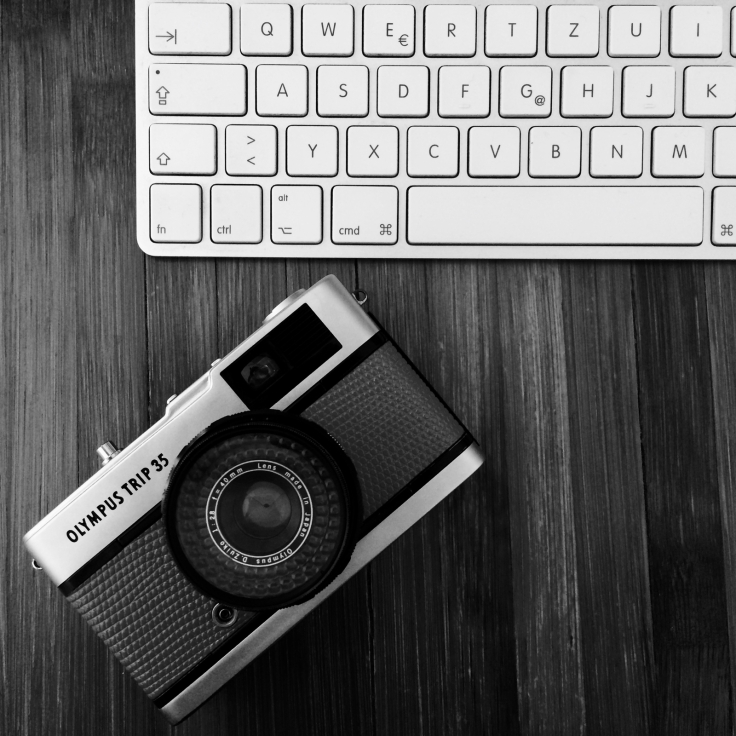 Yes, daddy’s got a new toy! I had one once, quite some time ago, and unfortunately, during a tough time when I was wavering in my belief in film photography I sold it. It was stunning, clad in red lizard skin leather, clean and shining. I regretted selling it ever since.

Just a week ago I saw one on eBay, supposedly very clean and working, for a VERY good price. From a professional seller in Spain, with the additional insurance to be able to send it back for a refund if it was no good.

One click on ‘Buy Now’ and some days later, it was in the mail. And lo and behold, it is as described! Clean, working correctly…. what could I want more?

Yes, one thing I did want more! It came in the standard, square-gridded plastic covering Olympus used for these gems. But the one I once had was dressed in leather. I had ordered the covering from Aki Asahi in Japan who does a great job in providing replacement perfectly fitting leather of the finest quality for a lot of cameras (he’s got light seal kits too!). Do not be put off by his antique looking website please. His products are gorgeous and not expensive. What’s more, the items arrive very quickly.

But hey, I still had a replacement kit in a  drawer somewhere. So off comes the original plastic and after cleaning up the old glue with alcohol, the leather cover was carefully stuck on.

A stunning camera, isn’t it?

According to the code on the back of the pressure plate of my ‘new’ Trip, this camera was manufactured in march ’77, exactly 40 years old now! Does it look that old? No way!

Hardly a scratch, well there’s some dust on these photos, but I was so eager to share it’s arrival that I simply forgot to clean the lens barrel. The few remaining smudges will be polished out in the next days, but right now there’s a film in it that needs shooting.

This camera is simply a work of art. It feels great in the hand, has just the right size and weight to give you confidence. It feels solid! No cheap flimsy plastic here, just good old metal and mechanical greatness.

Operating the Trip 35 could not be easier. Just set the film speed on the front of the lens barrel (25 to 400 ISO – later models went to 800 ISO but they had that ugly black plastic shutter release…), insert film, wind on with the ratchety wheel on the back and go out. The camera does everything else, without any batteries!

Well, you’ll have to focus manually… scale focus mind you. So you better practice guessing distances a bit. Helpfully the Trip 35 has got some easy symbols on the focus ring to help you.

There are mountains for infinity focus, a bunch of stick people for group shots at 3m distance, two half-people for bust shots of two people at 1,5m and finally one half-guy for headshots at 1m distance. If this is confusing, just turn the camera on it’s head and you’ll see a corresponding meter and feet scale. You can even undo some screws in the lens barrel (or better have it done by someone who knows what he is doing), and turn the distance scale up.

What’s great with this cameras finder is that I see not only the whole of the frame lines even with my glasses, but there’s this tiny ‘judas window’ at the right below the main window where you can look down onto the lens barrel and check the distance symbol (or number) and if the camera is set to auto or manual aperture.

Ah yes, that brings us back to the magic light meter of this camera! If there’s not enough light to warrant a good photo, the Trip 35 will simply prevent you from wasting film! A red flag will pop up in the finder, telling you to stop doing stupid things like underexposing your precious film.

The precious looking diamond pattern around the lens hides the selenium light meter that works without additional current. It moves a tiny needle under the top cover and when you press the shutter button, a stepped mask rises up and traps the needle at one of it’s settings. The aperture closes only as far as the needle went…. easy peasy!

Shutter speeds? Sure the Trip 35 got’em, two of them to be precise. A 200th and a 40th of a second. The camera chooses them according to the light. The metering is quite precise for a simple system like this, and combine this with the exposure latitude of film and you are certain to get correctly exposed photographs. Even on slide film, promised!

Now what is there more to tell about this camera? Ah yes, I told you about the pesky red flag watching for correct exposure. Well you can trick it out! See the aperture settings on the lens barrel? Normally they stay on A for automatic, but you can set them to any fixed aperture you like. From 2.8 up to 22.

These settings are labelled ‘for Flash’ as you can also use them with a manual flash you either slide into the hot shoe or connect to the PC port. Now if the light is low you can also set the aperture to 2.8, the camera will chose 1/40 of a second. With some luck your photo will be OK.

But enough of the technical stuff, let’s get to another ‘feature’ that makes this camera so good: The amazing 40mm f:2.8 lens! It’s a 4 element called D.Zuiko where D. does not stand for a first name like Daniel or Damian. No, D, the fourth letter of the alphabet simply means that this is a 4-lens job. And what a job it is. It’s sharp! As in razor sharp! It gives great color, hardly any aberrations and…. OK, not much light falloff at the corners at big apertures. The results are simply amazing for such a simple, automatic camera.

Those were the days when camera manufacturers were still proud to do more than just the basic stuff. They really went over the top when designing a camera and stuffed them with goodies that still amaze us 40 years later.

What can I say? This model was in production from 1967 to 1984 and more than 5 million were built! Some say 10 million, but that includes the later ugly plastic model.

For me this is, together with my XA2 simply one of the best cameras to have with me any time. A bit too big for the pants pocket it needs a jacket, but is still light enough not to weigh you down and tire you.

Now if I planted the virus in your brain and you want one… beware! These are old cameras and can have any illness other old cameras have. Ranging from fungus and mould in the lens to non working light meters and anything in between! In fact any selenium light meter will inevitably fail sooner or later. Expose it to light for a very very long time and it will begin to fade and finally die. I have seen cameras with selenium meters in shop windows, exposed to the sun. Do not buy these at any price!

Try to find one, even if it’s more expensive, that you can send back if it’s non working. Try to find one that comes with a lens cap as it might have been stored with the cap on, thus protecting the selenium cell.

How to test it? Cover the selenium cell with your hand and press the shutter. See the red flag? That’s great! Then half-press the shutter in varying light conditions and see if the aperture, a simple square thing, reacts accordingly. It does? Lucky you, the camera might be OK! But the final test will be to put a roll of film through it!

But enough talk, here’s the stuff we all want to see. Pictures from the Olympus Trip 35 – they are from my former one as I still have to finish the roll in the new one.

Enjoy the show and thanks for visiting!

17 thoughts on “The Most Beautiful Camera – Ever!”