I remember very well when I was young, about sixteen or seventeen and I hunted the Photography stores for my first SLR.

The shelves were full of beautiful cameras, Olympus OM10, Canon A1, Pentax MX or Nikon FM as I remember…. beauties, all of them. Most out of my price range. And on the top shelves were the real ones, those we might dream of but will never hold. The Canon F1, The Nikon F3, Olympus OM-1…. The overlords, untouchable! You bow in their presence, you fall to your knees and avert the eyes.

Below, on the bottom shelves were other cameras. Cameras I didn’t deign to look at, too lowly for an aspiring shooter like me.

Now really would you like to get seen on the street with a…. oh man that word hardly get’s out of my mouth… with a Praktica?

In a time of beautiful, sleek machines, their square form, that silly shutter button planted too low on the front, all combined to make them as unattractive as possible.

Add to that the loud, thunderous shutterclap (yes, impossible to call it a sound!) and you have cameras that will hoard the shelves for a long time, as Pentacon, the maker of these things, came to realise soon afterwards.

Now, about 35 years later, being older and not much wiser I hold a Praktika in my hand and I simply want to slap myself. What a bloody stupid idiot I was!

Back then I finally bought a Canon AE-1 and was happy. Well happy less a good chunk of money! Happy but annoyed by the shutter priority, the convoluted way to check depth of field….

Luckily ( 😉 ), 2 years later the camera got stolen and I was GIVEN a Nikon F that never left my side until I did another stupid thing – sold it to buy another Canon, an EOS 300D, the plastic fantastic cheap digital DSLR.

OK, back to the Praktika! Mine is a model MTL 5 B, proudly embossed on the metal front! Wait, metal? No!

Even before Canon built their A series cameras with plastic top and bottom plates, nice plastic, with a convincing metallic coating, Pentacon had mastered the production of this stuff. Apparently the Japanese visited the factory and got some ideas there.

Forget the plastic, this camera feels solid, looks the piece too. Like Spongebob Squarepants it’s square, but as Huey Lewis used to sing, It’s Hip to be Square!

And it’s heavy, it somehow manages to inspire confidence that it will get the job done!

As for the handling, everything sits just where it’s needed. A rewind crank on the left shoulder, a shutter speed / ISO dial on the right with the advance lever and film counter and the shut….. ouch, no shutter release!

You find it lower on the front. Placed strategically so that it’s awkward to operate with your forefinger as it’s quite low and when you press it with your middle finger you don’t know what to do with the forefinger… Who thought of that? 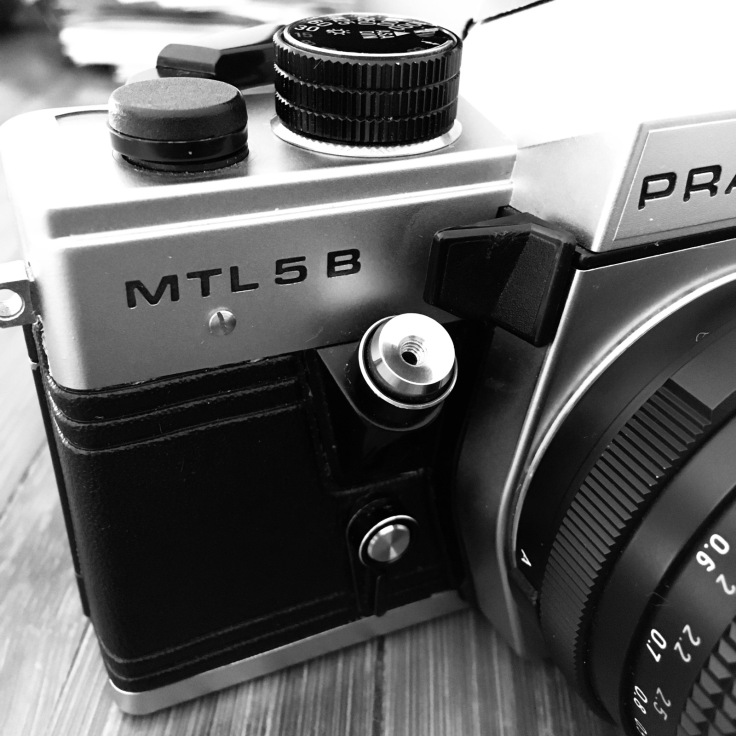 Now with a bit of practice this can be a boon! Press the shutter with middle finger and operate the shutter dial with the forefinger… voilà, problem solved! Genius!

Just above the shutter button sits the depth-of-field-peview-/-metering-button. Grand and long name for a simple plastic thing, we’ll call it DOFP/M from now on! And it works! Compose, press DOFP/M button, adjust aperture with your left hand and/or shutter speed with your forefinger and release shutter. CLACK!!!!! Yes it’s bloody loud! It’s after all a full metal shutter running vertically, built of soviet stainless steel – well, sometimes Pentacon got shipments of corroded soviet stainless steel as it appears according to this video about the Pentacon factory (sorry, in German).

Under the shutter there’s a self timer, the usual lever giving about 10 seconds notice and a release button. Below the camera there’s the battery compartment, only for the very basic and slow meter, the rest of the camera is purely mechanic as you can hear when you turn the shutter wheel – gears ratcheting inside! Then there’s the rewind knob and a tripod socket, not in the center of the camera but under the lens mount…. strange placement again.

It’s inside that things get interesting. All standard fare with one notable exception: Pentacon had invented their own quick load system.

It’s easy… on paper. You draw out the film leader to a mark on the right, all the while fiddling it under the black plastic tab, at the same time over the teeth of the advance spool and under the metal bracket on the takeup spool. Got it? Then try it… takes some getting used to…. but like the shutter button, the tripod socket, the DOFP/M lever, it works somehow. When you wind on the bracket folds the film leader sharply (try that in winter with cold film….) and holds it tight to the takeup spool!

The metal shutter is very clean and not damaged at all on my camera.

Often the shutter blades get crinkled from invasive thumbs while loading film. A danger that is present with any camera but particularly with the Praktica’s steel shutters. Though I heard that even a well crinkled shutter still works fine as long as it’s still light tight.

The light seals in the grooves on the back are waxed string by the way – no decaying foam! Well done Pentacon!

One word about the stuff covering this MTL 5 B. The earlier Prakticas were wrapped in some ugly ribbed plastics stuff.

This one however appears to sport a fine covering of imitation leatherette…. feels OK, looks fine!

Well that about wraps it up, simple as a camera can be, easy to handle once you get your fingers to cooperate and really feeling good! As I said as soon as I unwrapped the Praktica I realised what I had missed all those years ago.  could have had a cheaper camera that would have been perfectly adequate and it probably would still work today!

Ah yes, the lenses…. I nearly forgot to tell you the best news! The camera has the ubiquitous M42 mount and has about the widest array of lenses available of all cameras. From russian Helios and Jupiter glass over german Meyer Optik Görlitz (heard of that one?), Pentacon of course and Zeiss to japanese Pentax’s Takumars and Tomioka wonders. There are some expensive lenses among them but most are terribly cheap and terrible good. And all have character!

I got a Pentacon auto 1,8/50 Muti Coating metal and plastic lens with mine. focuses down to 0,33m (1ft) and looks nice and clean.

Of course I loaded a film at once and I’ll take it for a spin. Let’s see how it sees the world. More on the results of this roll soon! Stay tuned!

Thanks for this nice camera, Chester!

P.S.: The roll is done, now on to developing and scanning….

29 thoughts on “The Ugly Duckling…”