Having multiple cameras and camera systems brings you without fail to owning multiple lenses of the same focal length – unless you concentrate on compact cameras with fixed lenses of course.

I reduced my camera stable to Pentax M42 and Leica M39 thread mount stuff. But of course for each systems I have a selection of the compulsory 50mm lenses. Not a comprehensive collection but only four in fact I got hold of over the past months and years. 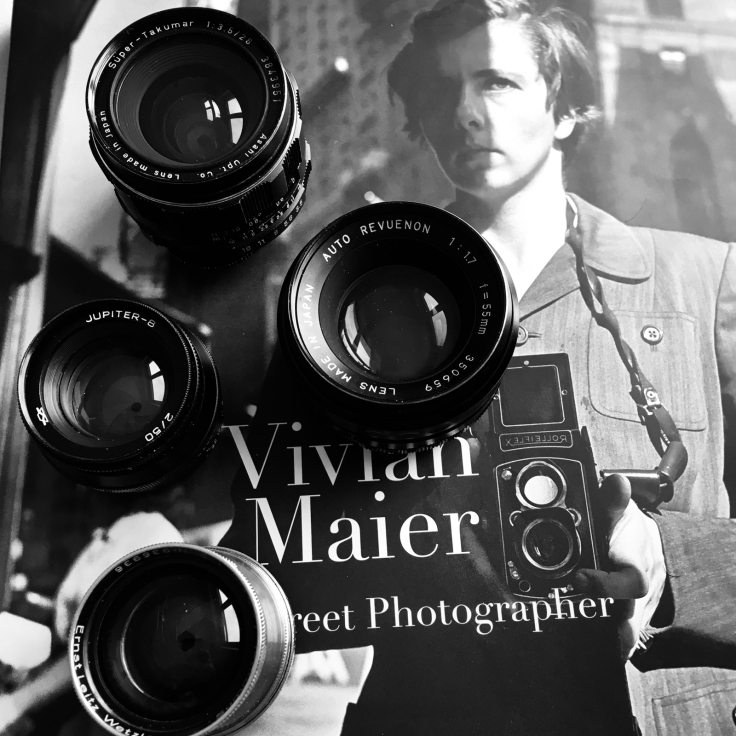 In the M39 corner there’s of course the old Summitar I got with my Leica IIIa, a heavy and solid chunk of brass and glass. There’s a cheap Russian Jupiter 8, by far the smallest of the bunch but not light for it’ size.

On the M42 side I have the great Takumar 55mm f:1.8. A real winner according to internet rumours, and radioactive on top! The last of the bunch joined my lens-stable just two weeks ago as a gift from a co-worker’s dad who sorted through his attic. A Revuenon 55mm f:1.7.

The Revue Brand was the trademark for photographic gear from the German mail order giant Quelle. A lot of rebranded Russian and East German stuff such as Pentacon and Zenit but also some gems. This particular lens is not from the east. Well, yes, it is, but from a much farther east. It’s ‘Made in Japan’ and supposedly made by Tomioka, the fabled manufacturer of Yashica’s and other’s high quality lenses.

So I had a little test session of the various lenses on a digital camera. Same chance for everyone. Each lens tested at it’s maximum aperture and at f:8.

The results were… a bit unsettling! Champions dethroned, holy grails broken, and Cinderella revealed…. And the subject is my ever popular roll-filler view from the bedroom window! Exciting stuff! Really!

The first photo is made with the Fuji 16-50mm, just to set a standard. Tack sharp and contrasty… digital goodness. Aperture here is f:8 as this lens has a minimal aperture of 5.6 at 50mm. So why bother. Sorry but even a modern lens on a digital camera can’t make for bright sunshine.

Fuzzy as hell, but at least this cheap lens makes a photo. Overall quite crappy though.

Then we have the Leica Summitar at f:2

Whoa! Stop, must be an error here. But no, I checked twice. This is a Leica lens but who put that veil in front of it. And what’s more, it has been CLA’d last year and looks quite clean. So not any major haze or stuff doing this. This lens at f:2 is still fuzzier than the Jupiter 8!

Now that’s better! A notch above the Jupiter 8 but not on the Fujinon level yet! Not bad though for a 50-year-old lens.

I would rank this one level with the Jupiter 8 at this aperture. Perhaps a bit less contrast. For a free lens it’s not bad though 😉

Spoiler alert: At f:8 the picture changes quite a bit!

…gains some real sharpness and contrast.

The Summitar on the other hand…

…though much better than at f:2 is still not the sharpest kid on the block, nor the most contrasty. Sure it’s a fifties fifty, over 60 years old and not a Summicron but still… I thought it would be better! Beaten hands down by a Russian Jupiter 8…

On to the Super Takumar:

Sharpness on par with the Jupiter 8 but a tad less contrast… how come? A Takumar radioactive wonder-lens beaten by a Jupiter 8… Strange!

OK, on to te. last one, the Revuenon free lens:

What shall I say? Quite sharp, a breath sharper than the Takumar to my eye and a still very nice contrast… At f:8 this is a clear winner! It beats the hell out of a Leitz Summitar and also a Takumar… at no cost!

If you’re still with me I’ll try another round, only at f:8, focusing close on a colourful subject. And color rendition is an important point in this test.

In short, I noticed three things:

First, the Summitar is true to it’s nature, even close up. There seems to be a slight veil covering the scene, muted colours and contrast are it’s trademark.

Second, the Takumar goes a bit over the top with colours. Apart from a slight yellowish tint, probably due to it’s yellowing lenses, the colours are vibrant and strong. No need for Velvia I might say! The yellowish tint gets better if you put the lens out in the sunshine for some hours though… and when shooting black and white it saves you a yellow filter!

Third is, the Revuenon again shows it’s qualities. Sharper than the rest of them, Takumar included, nice colours and good contrast make this a great lens! Vastly underrated at an average going price of about 20€ on eBay…

Grab One! But look out that it’s the good one with ‘Made in Japan’ on the filter ring and the funny rubber focusing ring…

As a conclusions I might add that though some of these lenses are (astonishingly) good, they are no match for a 125€ (used) Fujinon XC 16-50mm kit lens. OK, the Fuji weighs much less than the heaviest of the rest, the Revuenon at 220grams… though it’s a much more complex auto focus zoom lens.

I don’t really want to draw any rash conclusions here. Any of these lenses has it’s merits and uses, even the Summitar. It has that great ‘vintage’ flair and speaking of flair, it flares like hell in sunlight too. I was just astonished to see this magnitude of difference in a direct comparison. And how inferior this lens really is to the much cheaper rest.

Now I’m going to draw the wrath of the Leica fans out there….

Thanks for being here and sorry if I bored you to death, pixel peeping for once.

24 thoughts on “A bunch of Fifties! Pixel peeping!”